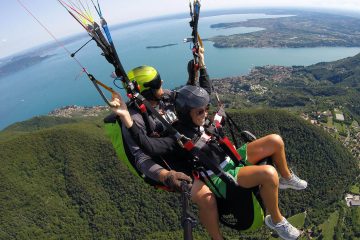 “Experience Lake Garda from an original perspective: discover the flights available in hang gliding and paragliding for unique emotions with high adrenaline content.”

The paraglider is a wing designed to allow the pilot to take off using leg thrust. It is characterized by the launching point along steep slopes such as mountainous ones. Paragliding, in fact, takes advantage of wind and height. Its origins date back to the late ’60s and, today, it has become a real sport for which there are also competitions. Tandem or tandem paragliding is characterized by the presence of a certified instructor who steers the paraglider. In this way, the activity is safe for everyone and the passenger can enjoy the adrenaline experience without any worries.

The hang glider, on the other hand, consists of a semi-rigid wing in the shape of a Greek delta with a supporting structure formed by three tubes. The first realizations of this instrument date back to the 70s. It represents one of the most fascinating ways to experience the sensation of flight and connect with nature.

Equipment and clothing for paragliding and hang gliding

The necessary equipment for paragliding consists of a harness, a spare parachute and a helmet. As far as clothing is concerned, it is advisable to wear trekking shoes in order to walk on the ground, which is usually uneven, and to be able to land safely. In addition, it is also advisable to wear a windproof jacket and sportswear depending on the season.

Hang gliding, on the other hand, requires a harness to allow the pilot a safe attachment and the passenger to tie up with shoulder straps and leg loops. Clothing is similar to that of paragliding.

Both hang gliding and paragliding are called free flights because the flight takes place without the aid of an engine. The launching and flying technique for paragliding requires, first of all, to lay the glider on the ground with the edge up, then to hook the harness and tie it with the breastplate. Then, you take the harness and move forward running so that the wing inflates and rises bringing up the pilot and passenger. When aloft, the pilot puts on the tractions with his hands and feet to float in the air and manage the direction and landing.

Hang gliding, on the other hand, is a pilot-driven vehicle that uses only the displacement of his or her weight. The pilot, in fact, lies on a structure that supports him and acts with his body and a control bar to give the direction.

Paragliding and hang gliding: what are the differences?

Paragliding and hang gliding are similar in some aspects, but also different in some of the main characteristics already mentioned. First of all, the seat: in hang gliding, passengers fly facing forward and the pilot controls the glider by means of the bar; in paragliding, on the other hand, the wing shape is maintained by the air and, while the passenger is seated on a saddle, the pilot controls the glider by means of the two handles, the brakes and the controls. The speed is also different: with hang gliding you fly, take off and land at a higher speed than with paragliding. Hang gliders can also be powered, unlike paragliders.

Where you can fly in Italy: paragliding and hang gliding on Lake Garda

On Lake Garda there are areas ideal for paragliding or hang gliding that allow you to enjoy a breathtaking view. The certified instructors are able to make passengers experience unique and adrenaline emotions in total safety. What are you waiting for? Book now an exciting flight on Lake Garda!